All in a Row - an autistic review

For those not aware of the play "All in a Row" or the furore around #Puppetgate I'll attempt to give a brief overview; this play first burst into my awareness a few weeks ago via Twitter when I saw someone's post about a puppet replacing an autistic child. This got me very confused at first until I read into the story and discovered about the existence of the play and the nature of the autistic character in it.


The play describes itself as thus:

Laurence likes pizza.
Laurence is about to go to school.
Laurence thinks it’s okay to wee on mummy’s pillow.
Like any couple, Tamora and Martin have big hopes and dreams. But when your child is autistic, non-verbal, and occasionally violent, ambitions can quickly become a pipe dream.
In a household brimming with love, resentment and realisations, meet Tam, Martin and Laurence’s carer Gary as they struggle to care for their beloved boy. On the night before social services finally intervenes, who is the victim here? Who was the traitor? And who do you blame when you can no longer cope?

The storyline is about two parents, their 11 year old autistic child and his support worker, and all the chaos that unfolds the night before Laurence is due to go to a residential school 200 miles away - something that it seems was triggered by Social Services getting involved after an anonymous call reporting bruises on Laurence.

Now, the storyline itself, to me, is incredibly thought provoking. It encompasses all the fear and rage that families battle as they try to do their best for their loved ones, I empathised a lot with the parents emotions during the play, not in relation to an autistic child but thinking about my own grandparents and the increasing possibility of them needing assisted living at some point and our growing fears over dementia and 'losing' them.

But, no matter how much I loved some of the script, salty language and all, or how much the heart of the plot line resonated I could not escape from the huge elephant in the room. 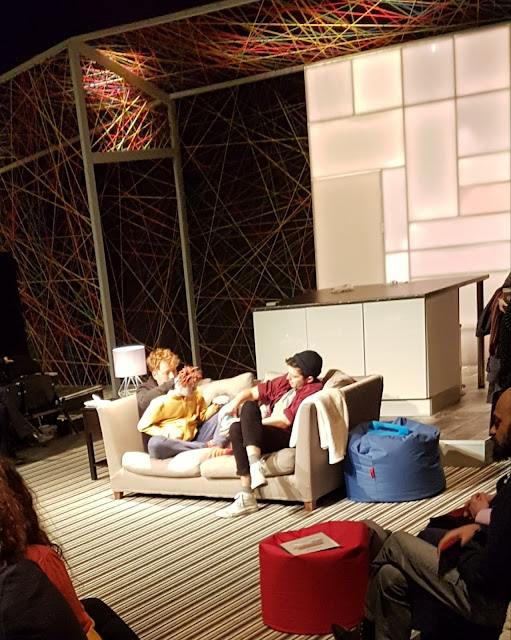 It was offensive, it was a man with a grey bizarre puppet body in front of him running around making non-verbal noises and, when heading into meltdown, biting the other characters.

I don't understand or agree with the statement from the artistic director:

To me this is a cop-out, yes a child actor may well have struggled with some of the language and volume levels to the adults screaming rows, and yes there would have been the need for caution when doing the physical restraint scenes (at one point the father is over the child pining him down after a full-blown meltdown where he attacked his mother from behind as she was screaming at the father) but that in no way means they should jump straight to using a bizarre half-puppet prop instead!

The fact of the matter is that there was an adult actor behind the puppet, controlling the movement and providing the vocal noises. Why could this actor not simply have been Laurence? Why the need for a grey faced puppet torso? Yes having an adult play an 11 year old may look slightly odd but most good actors are capable of making you forget those things with their performances.

And it makes me so angry that what could have been a wonderful opportunity for discussion about residential care and the fear of sectioning and mental health units has instead become all about a damn puppet.

I'm so disappointed that the people behind that choice still don't seem to understand why autistic people and our allies are angry, I attended with a non-autistic friend who works in the autism research field and she too was incredibly uncomfortable with the entire way Laurence was performed.

And it makes me sad, there was such a wonderful core to this play, a real understanding of fear about change and the terror over the power that 'professionals' have. There is a brilliantly nuanced conversation between the father and the support worker about how residential staff cant hold doors shut and how there is the possibility of sectioning to a mental health unit if Laurence is asked to leave the school.

It nearly brought me to tears because these are incredibly real fears being delivered in a very realistic style, its shouting and arguing and absolute heart-breaking devastation at trying to prepare for someone you love to move somewhere 200 miles away from you.

There were some odd moments and some "saw that coming a mile away" moments - a very strange, clumsy and out of place comment from the support worker about animal reincarnation that was quite offensive, although it was dealt with superbly by the parents, and the almost soap-like nature of the mother getting drunk and trying it on with the support worker - I was sat in my seat silently screaming "workplace harassment!!!!" during the whole cringe-worthy lead up.

And, of course, the obvious (to me at least) conclusion about the anonymous call to Social Services. It was cliched but there was still some beautiful dialogue from the characters in the build up, the raw emotion being displayed by the actors was honest and hard to watch.

But again, through all of this I was distracted by the damn puppet. That and the facial responses of the front row of the audience on the other side of the 'stage' as this whole saga played out in a 'living room' on the same level as the first row of seats, with only a small raised platform area at the back of the space, representing the 'kitchen' area (complete with stocked cupboards and an openable door to a 'fridge').

I can't help wondering just how powerful this play could have been if there had been a proper actor used to portray Laurence, then all the furore and anger would have been replaced with meaningful discussions about family situations like the one presented, about residential schools and ATUs, about the procedures support workers and social services are supposed to follow, about other people's pity and outrage as the father describes when telling a tale of a trip to the park.

There were some elements separate to the puppet that I didn't like, I objected massively to the cliched scene between the mother and the support worker that follows a conversation about online dating, and I really disliked the fact that the father was implied to have smoked marijuana whilst out of the house buying cake - by the end of the play the support worker has left and the two parents are either stoned or drunk, neither in a truly fit state to be responsible for a child as vulnerable as Laurence.

To be honest there was a point towards the end, during a massive argument scene, that it did cross my mind that the only reason I wasn't worrying about Laurence ending up dead somehow was because I knew that would have been mentioning in all the criticism of the play going around already.

The final ending was vaguely sweet, I'm not a fan of social stories really but having Laurence between his two parents on the sofa as they sobbingly read one to him to prepare for the move to the school was the right way to end the play, there were massive implications throughout that their marriage is not going to last once Laurence isn't in the house holding them together anymore so to see them united around him was a nice way to close.

I wish I could see a performance of the same script with a young adult actor playing Laurence, and I wish more than anything that the storyline I watched wasn't realistic, that there aren't families out there going through the exact same things.

It was hard to watch (both content wise and sensory as coloured lighting is used along with several instances of shouting and screaming) and hard to process my thoughts on but overall I'm glad I went, that I saw it for myself and made my own judgements. I hope it can be a step towards the play I want to see, the play the autistic community deserves to have put on.


Overall score: 3/5 - huge potential ruined by one offensive choice.
Posted by HJ_Ellis at 00:11

Email ThisBlogThis!Share to TwitterShare to FacebookShare to Pinterest
Labels: #Puppetgate, All In A Row, Autism Awareness

I'm autistic, what does that mean?

My 'Autism journey' started back in 2002 when I was a stubborn, hormonal, exam-stressed, self-centred 15 year old girl - which if yo...